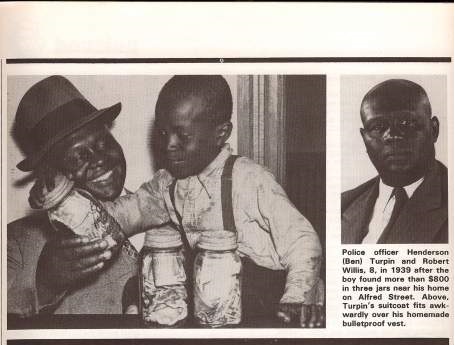 We wanted to take a moment to share a black story with our readers involving Hunt Street Station. This is a story of a police officer named Ben Turpin, the historic 3rd police precinct’s first-ever black police officer. There isn’t much-written history involving Ben Turpin, and what is written isn’t necessarily pleasant. However, we feel it’s important to share and inform. There has been such a detrimental relationship between police and black communities and Hunt Street Station prior to our coworking days bears the same shame.

Originally built to serve as a beacon of the neighborhood, to this day we are working to try and make that promise a reality. Truthfully, many people in the neighborhood still bear the scars of the prior police station, and many more remember Ben Turpin, one of the most feared police officers in Detroit’s history.

Ben “Henderson’ Turpin became a police officer sometime in the 1920s and served as a police officer for 30 years. Again, he was the first black police officer at the station. He was feared by both his peers and the neighborhood for being tough and at times brutal.

Stories shared to us from residents who have lived in the neighborhood for generations speak of an officer that would beat up young black children, and reportedly killed over 30 people, though none being children. Some say he was tough on children because if he wasn’t, the white officers would do much worse, but that’s hard to say.

Ben Turpin served until the 50’s when his diabetes got the best of him, and he passed in 1962 where no one reportedly came to his funeral. Ben was a fan of baseball, and apparently drank a case of coca-cola each day. His vest was placed in a museum for a few years until it was stolen along with his weapons.

Today, we work at Hunt Street Station to be that beacon in the neighborhood. We pride ourselves on being affordable and accessible so that all Detroiters have a place to work, collaborate, and build their businesses. Almost half of our members identify as African American, which is something we take pride in, and hope to continue to see that number increase.

We have entrepreneurs, small business owners, leaders of NPO’s, freelancers, mothers, fathers, community leaders, and more. Each creating their own story. A story that will be embedded in our history someday. We are reminded by the brutality of Ben Turpin, and how he failed the black community in so many ways, and learn from that.

Some might ask why we would share this story. The answer to that question is because not every story is pleasant, not every story is full of heroes or triumphant victories. Stories like these remind us of the fullness of black history, ranging across generations, and help paint a full picture.